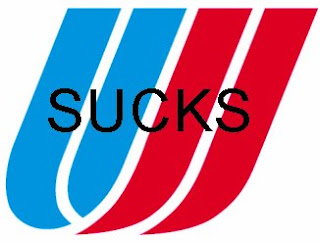 When it comes to hating on airlines, United is my favorite poster child. I had several problems with United a few years back (here). They were so bad, I vowed not to fly them anymore, unless, of course, it was absolutely necessary. I also stopped using my United credit card. All of this was over a $150 charge. Was it worth it United? They probably thought so at the time.

So it wasn't much of a surprise yesterday when my big bro called me and told me he had a story that was better than mine. He's supposed to go to Chile in a few weeks with my dad. They've been planning this trip for a while. Almost 8 months. They were supposed to fly United.

My dad called United two days ago to ask about changing their seats. What seats? United had canceled the flight and failed to notify my dad or my brother. If they hadn't called, who knows what would have happened? Imagine showing up at the airport for a two week vacation to another country, only to find out the airlines took it upon themselves to cancel it and not notify you? It's not like they didn't have email addresses and phone numbers for them. The trip was on Untied mileage. So of course they did. And this wasn't some puddle jumper that flies every hour on the hour. It's an international trip. What about hotel reservations, rental car reservations, dinner spots... all the plans they've put together? Then I asked myself, why would United care about anyone but themselves? And I realized, this was par for the course.

Now what? Well, not only did they not have an alternate flight or plan, but in typical United fashion, they outsourced the problem. The plane they were flying was Air Canada - one of their code share partners. And they just placed the blame on them even though United was handling the trip. In addition, my brother could only talk to outsourced customer service and couldn't get anyone with authority on the phone. Livid doesn't begin to describe how they felt.

They had to re-book their flight on American because, well, they didn't have any other choice. Leaving the same day but coming back a day later. Not perfect, because now my dad has to scramble to get someone to give him coverage for yet another day. What if American didn't have an available flight? A canceled trip for sure.

If my family's experiences with United is any indication of their performance at large, I don't see United lasting much longer. And good riddance at that.

I have read some rumblings recently about the deterioration of customer service and people who were in favor of it. They claimed that complaining customers can sometimes be a greater burden than they're worth. Sure, in some cases, where customers do nothing but hassle and heckle. But when you turn your backs on your long time customer base (my family has flown United and American our entire lives), that just lacks common sense. Your customers are your evangelists. They will live and die by you. They are the best advertising you can get. And the worst. I can never stress enough that without your customer, there will be no business.
Posted by Lefty at 5:33 AM