Are Unions Good or Bad? It All Depends... 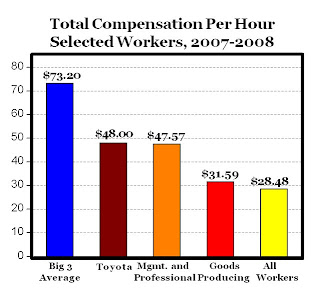 In my post about the government bailout of the auto industry, I made a crack about unions. I'm not a fan of unions. Let me explain.

My memories about unions start back in 4th grade (give or take). I remember reading about the Industrial Revolution in our history book and seeing the squalid conditions that workers had to endure in the little pictures accompanying that chapter. It sticks with me today. And every time I think about unions, the pictures come back. Long work hours, crappy living conditions, unfair labor practices. People stacked on top of each other in makeshift communal living. I couldn't really grasp what it was like during the days of the booming tanneries in Lynn (the town next to where I grew up) and Lowell, Massachusetts. It seemed dreadful. And finally, the workers began to unite. They protested, picketed, and finally unionized behind a central leadership to force changes in the industry. It worked. Albeit slowly. And it achieved its goals. And worked well during the Industrial Revolution and even beyond.

Today, things are a lot different. Unions have incredible power and leverage in their respective industries. They force labor issues often. France, a model of labor strife, has their transportation shut down intermittently. I was stuck on a train for 48 hours because of this back in 2001. Yes, I could get off, but the train wasn't moving. Shut down on the Spanish border because the French workers struck.

Now I ask you to take a look a little deeper into unions in the States. It's the larger unions I'm most concerned about. The airline and auto labor unions for example. Take a look at the auto union's wages above. There are stories littered across the web about forklift operators making over $100,000/yr (here). And you want me to feel bad for these people? When a union gets big enough it becomes a danger unto itself. With the clout of these unions, the automakers and airlines are at their beckon call. If the unions shut down their industries, this stands to bankrupt the very people they work for. These workers aren't clamoring for improved conditions to unbearable circumstances, but they're working towards higher pay, more benefits, and less labor. At what cost?

These unions are making American companies uncompetitive. You wonder why manufacturing is getting outsourced? Why would you wonder when a line worker is making $30/hr (a staggering $65/hr cost to the employer considering benefits). Or that forklift operator? You wonder why the airline industry is suffering and cutting benefits to the people paying for their services? Because their workers keep asking for more. Why can international airlines still serve food (and Continental airlines I might add), especially airlines from weaker economies (sure there are some where there is government intervention), but their workers aren't unionized.

Now here's a case where I think unions are still necessary - or at least some sort of organization: eBay sellers. Their sellers are getting raked over the coals and they have no recourse. Maybe they stop selling, but then their livelihood shuts down. Or how about doctors? They're prevented from striking, for obvious reasons, but they have very little voice in the changes that are occurring in their industry. Sure there are physician lobbies - but they don't work very well. Less care, less reimbursement, no recourse. That's what's been happening for the last 15 years. During the discussion to socialize medicine, it's interesting nobody talks about the current state of medicare and medicaid and the continual cutting of reimbursements to physicians. I guess your poor grandmother doesn't need that extra test ordered to save her life. And if she does, I guess doc should pay up.
Posted by Lefty at 12:23 PM