Prius drivers are the absolute worst drivers in the world! They suck and I know why... 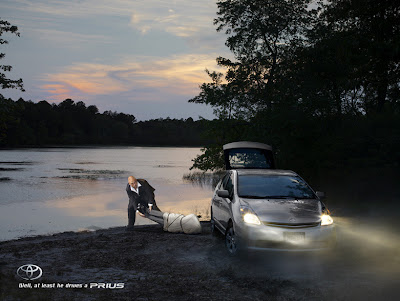 This idea first settled into my head about a year and a half ago. It's been germinating ever since. I've always been interested in finding patterns in noise and this one was just too easy to discern.

Why are Prius drivers the worst drivers on the planet? Oh there are just too many reasons. How about driving well below the speed limit in the fast lane? How about switching lanes without blinkers or without a care in the world? How about cutting people off? How about blinkers on and not turning. How about yapping on the phone while doing 20 on the highway? How about inching down the road, obviously looking for a parking spot, but not caring that there's a line of people behind them. It's unbelievable if you haven't noticed it before, but I guarantee that after you read this, you'll notice I'm right within a few days. All I'm asking for is some damn common courtesy.

I did some research to see if other people had written about this. One comment said that the reason we notice Prius drivers are the worst drivers around is because there are so many Priuses on the road. I hope that commenter wasn't serious - or else he probably drives one. More prevalent than BMW's in the Bay Area? More prevalent than Honda Accord's? So much more prevalent that I notice an undeniable pattern? I doubt it.

Here's my deduction as to why Prius drivers suck. Now I have friends that drive them, so sorry to you guys. And I do realize that this is a broad, sweeping generalization, but here goes. Entitlement. These people think that because they've shelled out some money to reduce emissions that they're now holier than thou? That it doesn't matter what they do because they're on a crusade to save the planet? It's their way on the highway!

I don't mind people saving the planet. It's a nice gesture. I do my share to save the planet as well. But just because people do good doesn't mean it entitles you to anything. I recycle. I reuse grocery bags. I buy energy efficient products. And I don't drive like an ass.

So all you Prius drivers. Go take some driving lessons. While you may be decreasing your carbon output, you're increasing, exponentially, ill will throughout the world. And that may just be even more detrimental to the environment.
Posted by Lefty at 8:32 PM 39 comments: