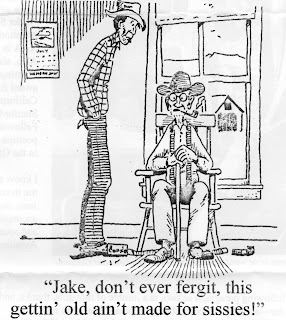 My last day in Florida was a good lesson in history. I visited my grandfather for the second time this trip. He's 88 years old and full, I mean full, of wisdom and stories from his vast lifetime. From the Great Depression, to college in the 30's, to World War II, and on and on.

He recanted stories of his first airplane ride and how the hull was made of metal piping covered with cloth. He talked about Atlantic City when it was the vacation destination of the world. Now look at it. He spoke about his wild nights partying and picking up women. Yes, my grandpa did. He spoke of his marriage to my grandma, how he met her. He talked about the history of our family and the migration from Germany in the mid 1800's. He talked about his family fighting for the Confederacy in the war. And surprisingly, it was the one time he admitted to being on the losing side of something. He spoke about the transition from the Great Depression to wartime prosperity, to the sexual revolution, to civil rights and beyond. He's a living history book.

He had story after story after story. When you grow up with your grandparents, you take them for granted. You don't take their gifts for granted, because those are always awesome, but you take who they are for granted. I always took it for granted that my grandpa grew up in the 1920's and 30's. That he had a direct connection to people born in the 1800's - which to me, seems so so very far away. He is my living connection to my family history and I never really understood the significance.

We're but a blip on the radar of life on this earth. But within each of our families, there are lifelines that tie us to the past. Talking to him about his life is one of my few chances I have to get my family history lesson face to face - along with his take on the progression of our culture. He has far more experience.

I came to realize that as different as we are, we share a lot of commonality. He's a staunch Republican (who thinks I'm a liberal). I'm a staunch middle of the roader. But certainly not a staunch Republican. I like to think I fall somewhere in between. I often say, because it's nice and cliched at this point, that I'm fiscally conservative and socially liberal. But really. Why do we have to be on one side or the other anyway? Before I go off on a tangent, my point is that I share a lot of the same perspectives he has. And it's a pretty cool thing to figure out after all these years.

If you haven't spoken to your grandparents. I mean, really sat down with them, regardless of whatever differences you have, it's an incredibly rewarding experience to learn about your past. What brought you here. Where your family has been. And to also let him know where you're going, so he doesn't lose all hope, like most grandparents, on the current generation.

Thanks Grandpa!
Posted by Lefty at 4:38 PM