The US Automobile Industry - To Save it Or Not? That is the Question. 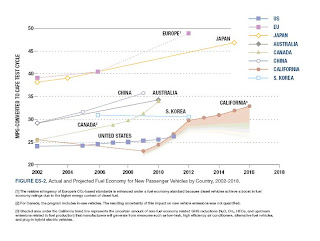 I was talking to my roommate last week about this and initially, I thought the industry should be saved. The big 3 are icons in America and across the world. Ford and the assembly line. Muscle cars. The Corvette and Mustang. Like a Rock. All iconic. And all American. But he said something that resonated with me. Haven't they had enough opportunity to save themselves? I reluctantly agreed. And now, after thinking about his rationale, wholeheartedly agree.

In my lifetime, the US auto industry has gone from bad to worse. To maybe a little bit better in recent years. In the 80's, American cars were built like crap. And Japanese auto makers began to erode the market for US autos. Japan built cars that lasted. The US built cars to sell. It was obvious to me then and obvious to me now that either the US automakers didn't care or couldn't create them. I think they didn't care, because, like the financial institutions, they didn't have to. They were still selling lots of cars (and making money).

When US automakers finally started improving on quality, the Japanese were one step ahead with style. While just a minor point, if you look at cars over the last twenty years, you'll notice that US cars lost their iconic advantage. The Ford Taurus? The Dodge Neon? Even the Mustang suffered during the 80's and 90's. The T-Bird? US cars were built like crap and looked like crap. Whose fault was this?

When US automakers finally started improving aesthetics to entice new buyers, the Japanese were building more efficient cars. Efficiency is both fuel efficiency and manufacturing efficiency. Obviously, the Japanese are way ahead in mileage efficiencies. Take a look at hybrids or electrics. All pushed to US consumers by Japanese automakers. What did the Big 3 do? Nothing. They didn't have to, because they were still selling cars. Big cars. SUV's and Hummers.

How about manufacturing efficiencies? Well, that's a no brainer as well. The Japanese began building plants in the United States and even engaged in joint ventures with US automakers to build plants here in the States. I guess the US couldn't keep up or didn't know how to. Or didn't want to. Because they were still selling a few cars. Not as many. But still making money.

It's Finally Caught Up

For years Congress has been lobbied by the Auto industry not to pass higher MPG standards. Why? Because that would cost them money. Or they've lobbied Congress not to force them to include air bags or other safety systems. Why? Because that would cost them money. Take a look at the MPG regulations in the image above. It's ridiculous. China, a developing country, has higher fuel efficiency regulations than us. And yes, I did see this in an Inconvenient Truth (I was forced to watch it on Friday night even though I have a rampant distaste for Al Gore. But I have to say, it did it's job - and I'm glad he made it. I'm a huge fan of saving the environment, so if it raised awareness, I'm in.)

Well sure, things do cost money. But in the end, complying or willingly improving your product will provide a higher ROI. Competition never ends. If your successful, you'll always have people gunning for you. And, as the US auto industry has proven, you can certainly run out of luck. If the US were building great, fuel efficient, reliable automobiles like they should have been, we wouldn't be in this predicament.

Save them? Why? Will we lose jobs? Yes. But we're resilient. And innovative. And I'm sure we'll create jobs elsewhere. If we don't, well, maybe we'll have to.

And I'm certainly looking forward to the demise of the UAW union. Unions were great during industrialization. Now? They just seem like they hamper progress.
Posted by Lefty at 5:29 AM

I agree, they stopped innovating decades ago and we're to shortsighted to develop/take the lead on hybrid/economical cars. The US auto industry refused to innovate and now are paying the price - the US taxpayer should not.

Although I can't say I agree about unions. I think they serve a purpose in protecting and advocating for workers and that is just as relevant today as it was 30 or 50 years ago.

@abe - I'm glad we agree on the bailout idea. I think it's a terrible one. Thanks for the link to that article...

About unions - I have to say it's a slippery slope. While some unions are ok, I believe others are actually hurting industry, and have grown too powerful. Look at the auto workers union or the teamsters union. They have the ability to manipulate wage/benefits so much as to pull companies into bankruptcy or drive prices of their products so high as to hurt their bottom lines (US autos).

On the other hand, I think companies that attempt to manipulate its workers should certainly face consequences. So I can see both sides.