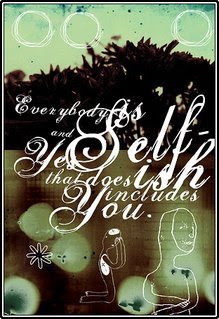 I originally wrote this post on 10/12 - but just realized when I published it last night that it didn't show up as the first post here, so I've had to update the date.

I've had quite a few conversations over the last several weeks that all converged around a central theme. They weren't related, contextually, but they were all tied to how people live their lives – and whether people are generally in it for themselves? Well, let me tell you this. From my research, there’s a much larger cluster of people who are selfish. And this begs yet a further question. One which I'm afraid I don't have a good answer for yet. Is the reason because people think it pays better to be selfish? I'm going to lean towards a yes. So what about you? Generally selfish or selfless?

THE SELFISH ECONOMY
Lots of conversations have revolved around the economy. Because, shit, who isn't thinking about it right now? It started with tracing the root of the current mess. And it all led back to selfishness. Big, fat, corporate greed. Remember Enron? Nobody gave a crap about Enron until they collapsed. Why? Because everyone was making money, hand over fist. And nobody pursued further investigation of corporate America, beyond firms tied to Enron. Sure, maybe it was naivety and maybe nobody thought it was widespread. But how could the people involved with, say, the global financial markets, really not know there were problems in their industry? Or maybe, just maybe, there were happy making money.

I was watching Jim Fuld, CEO of Lehman brothers, get grilled before Congress. And at no time did he appear to be genuinely apologetic about his actions. He said a few things, like it was weighing on him. But if you looked in his eyes, you knew he didn't give a shit. And it was pathetic. Because he walked away with about $450 million after running Lehman into the ground. I'm sure he was bummed it went bankrupt, not because of his employees or his clients, but because his legacy will now be tarnished.

In a world where CEO's can pull in half a billion dollars, I think it speaks volumes about priorities. Especially when you get paid regardless of your performance. Where's the incentive there? On the other hand, I'm more than ok with someone like Jack Welch getting paid a gazillion dollars. He ran an incredibly successful ship at GE and created tons of real shareholder value. But when you're making gobs of money creating fake wealth or bilking investors, or not even making money for your company, I have issues with that.

I had a different conversation about Alan Greenspan, the man who was Chairman of the Fed for almost 20 years. I have to admit, I've been a fan of his for a while, but I remember thinking that his departure from the Fed was a little suspect. Why would you want to leave that job if you're an economist? That's the peak. The Mt. Everest of jobs. And then he continued to make public comments about the economy after he left. Anyway, if he was such a great economist, didn’t he see this mess coming? Did he see an impending failure of the global economy? And if he did, is that why he got out? Because he knew his legacy would take a beating? Selfishness? Just something to think about. And...while I've been thinking about it for a while, he came out recently and said that just maybe, he screwed up a little (here).

Next up: The US Auto industry.
Posted by Lefty at 8:10 PM