Logo Web Design: 99design vs Choosa vs Crowdspring Review. Is Crowdsourcing / Spec Bad for Designers - Should They Really Hate It? Nope. 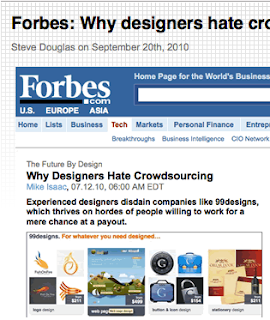 I'm in the process of submitting a project on 99designs for web design.  As I was researching which design site to use out of the abundance of sites: 99designs, crowdspring, Choosa, 12designer, 48hourslogo, Astada, Brandsupply, Creads, DesignContest, DesignCrowd, DesignOnClick, Graphiste, Hatchwise, LogoDesignGuru, Wilogo, Mycroburst, LogoTournament, and others, I came across a number of articles discussing how these sites are bad for designers.  How they're cheapening the design process and forcing designers to provide their skills, in many cases for free.

The argument goes like this... as a designer you submit a design for a project.  The project submitter likes your design as he likes others and asks for revisions.  This leads the designer to think they have  a good shot at winning.  They continue submitting revisions until the end and find themselves on the losing end of the contest.  Thus... work for free.

I can disagree more.  And there are several reasons:

Practice makes perfect: As a fledgling designer, there's nothing better than honing your skills with real practice.  These sites are the perfect opportunity to improve skills, using real world feedback.  Listening to your client is priority one on any job.  Regardless of outcome, you'll learn these skills which can payoff on future endeavors.

This happens in all industries: Ever hear of that manufacturing outsourcing problems the US constantly complains about?  This is one and the same.  Jobs are getting outsourced to cheaper and more efficient places.  It's the natural progression of industry and it's something we should embrace not hinder.  It will only make people word harder to become better.

Global Opportunity: These websites are giving opportunities to people who wouldn't otherwise have it.  People from all over the world can now compete with hometown designers.  Best designer wins.

If you're that good... then you shouldn't have a problem finding work that compensates well.  Having spent the better half of 12 years in the Bay Area, there was always a shortage of good designers and this gives entrepreneurs and businesses the opportunity to find designers.

Corollaries: There are already corollaries across the internet.  And people aren't complaining about that.  Look at oDesk, elance, or freelancer.com.  Any complains about these guys destroying industry?

People need to stop complaining about things being unfair.  Tis' life.  This is a free market.  Time to play.
Posted by Lefty at 12:48 AM 11 comments:

It's time to start writing again.  Since I turned down my startup several years ago, I've largely ignored tech blogs and the startup space, as I was plain worn out.  I spent time diving back into a corporate job.  I tried half a year at Symantec.  But going from startup to an archaic technology company more interested in resting on its laurels, just wasn't for me.  I've since found the perfect place.

Since I now work in the online ad space, I thought I'd share something I've been telling people for a few years now.  Something that finally seems all that more logical to those observing the industry.

Advertising based on profiles or online self selected interests or other user generated data - just doesn't work.  Things like remarketing, contextual, or search advertising do.

There's one simple reason with search ads.  It's intent.  Contextual - though not as powerful as search, casts a wider net.  It's all over the place.  Remarketing.  Obvious.

Think about Facebook.  When you're on it, do you even notice the ads?  Are you on Facebook with the intent to buy?

The only way I've ever though FB would be able to make money is to either:
A) Create an AdSense style platform and augment contextual WITH their profile data
B) Sell their data on a DMP or Data Exchange

Since they likely won't do B), their only option is A).  Little hints like the deal with Zynga and the launch of their exchange, which was far from an exchange, may show their intent.

As usual - I remain bearish on Facebook.  100B?  Really?  It's even way overvalued today at $65B.  I'd say a more appropriate valuation would be about half that.
Posted by Lefty at 7:50 AM 1 comment: