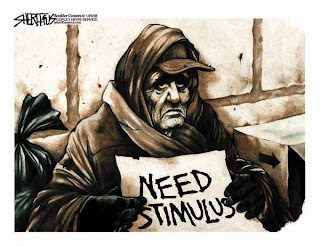 Fred talks about how VC's are flush with cash and how returns just haven't been worth it in the last 15 or so years. So people are starting to get out. As he notes, the top 10-20% of VC's earn 80% of the returns. And these companies wouldn't take a bailout anyway.

While he's responding to Tom Friedman's Op-Ed in the Times, I think there's a point both of these guys are missing. The people who need help are the entrepreneurs. The problem is access to capital for people who are innovating. And I assure you, VC's aren't the innovators. I don't know why we have to give money to VC's to give it to entrepreneurs. Let's cut out the middle man. Setup a government task force with an investment czar. And fund very early stage companies. Oh, and that's another thing. VC's don't invest in early stage companies. I don't care what any of them say!
Posted by Lefty at 2:38 PM