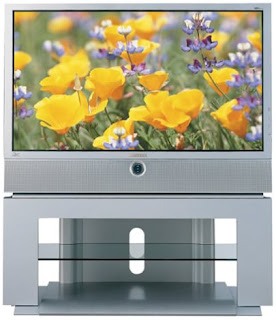 I finally got around to recycling my old television. Actually, it's not an old television. It was a relatively new Samsung DLP (model: HLN4365W) model, about 4 years old. But it was broken. And I just can't spend the money to get it fixed. And nobody wanted to buy it from Craigslist. So...

The brief history of the tv - and by the way, it never looked as good as the picture above! I bought it refurbished online. It arrived dead. The manufacturer had to repair it, so they finally came out and fixed the lamp and ballast. Pretty much most of the innards of the television. It worked for about a year. Then problems started happening again. But it was out of warranty. And I was moving out of town. So I stored it. When I took it out of storage a few months later, it was naturally still broken. I called Samsung and they said someone would have to look at it and the minimum charge was going to be around $250, not including parts. A lamp would be around $100. And a new ballast, color wheel, or whatnot would be several hundred. So I was looking at at around $500 to get this piece of crap working again. A television I had already spent $1200 on to purchase. And the picture was pretty crappy to begin with. And who knows if this thing would have kicked again in a few months. That seemed to be the pattern. Sure I bitched to them. But they weren't budging. And I was sick of the piece of crap tv anyway. I guess that's what I get for buying a tv with millions of moving parts or, as Texas Instruments likes to say, millions of tiny mirrors.

Maybe it was my fault for jumping on the DLP bandwagon early. I'm sure Samsung makes some better televisions these days. But it seems that plasma and LCD are the way to go now anyway. I just wish they hadn't used me as a guinea pig for testing their televisions. At my expense.
Posted by Lefty at 12:12 PM

@Mike - so, I didn't get much for it. I took it to my local Goodwill and donated it. You get a tax write-off for the value of the television, so you can actually get a decent write-off. I tried to list it on craigslist, but had no takers. It's too bad - someone with knowledge of televisions could certainly have fixed it on the cheap... but it was just an oversized paper weight taking up way too much space in my house.

Mine worked flawless for 7+ years so I guess it depends on the unit you got. I brought mine brand new, it cost me $2000 with tax at that time (I'm in Canada) so this could've made a difference.

It was working fine today before I give it away today. Kindly sad to see it go but today, it's all about flatness.

I could have used it for a gaming TV for the basement but I don't have kids yet and when I do, people will be probably giving bog LCD HDTV's away for free when the next thing hits. Alas, technology....