Tilapia SUCKS! What the Hell is the Deal with this Fish?o 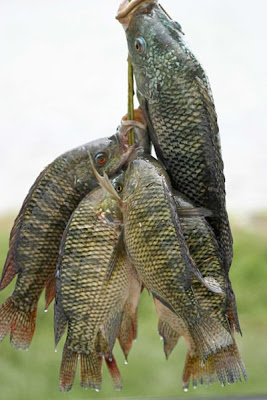 Tilapia reminds me of the emergence of hangar steak a few years ago. I'd never heard of it. I'm 33 and had never heard of Tilapia until about a year ago. Is this some new breed of fish? Some mutant species? Apparently not. It's been around for thousand of years. And it's even mentioned in the bible (not that I read it). Thank you wikipedia.

Like hangar steak, Tilapia has become the latest thing. I wasn't sure why, but suddenly it appeared on menus everywhere. I'd never really thought about it's sudden popularity until this week. See, I'd only had it once before, but in the last week I've had it twice. And I hope I never have it again. The first time I had it this week I was at a restaurant, and it tasted like mold. No kidding. Like they had just peeled some mold off a rock and mixed it in with the Tilapia. It was gross. It reminded me of a trip to Alaska I took about 10 years ago. I went fishing for Salmon, which were spawning. The ones that were near the end were literally wasting away alive (they looked moldy and probably tasted moldy). The second time I had it this week, I accidentally bought it. I swore I'd never eat it again. I was in the store last night getting some fish and I saw some Sole. I like Sole. Unfortunately it looks like Tilapia. I grabbed a package of Sole. Or so I thought. When I got home I realized my mistake. I made it anyway - thinking maybe the restaurant had some bad fish. And guess what? It tasted like mold and was fishy on top of that.

I looked up Tilapia and it's an easily farmed fish - which means, that's why it's gaining in popularity. It has low mercury levels and grows quickly. It's the 9th most popular fish in the US and growing fast. I guess taste doesn't matter. They apparently eat mostly vegetables. Probably moldy vegetables. You are what you eat.

Tilapia actually isn't that great for you as far as fish is concerned. It has an unhealthy relation of Omega 6 to Omega 3 fatty acids (here). Hopefully this will ensure Tilapia gets removed from menus. I'm dry heaving thinking about it.

The fish doesn't even look like it's good.
Posted by Lefty at 4:31 PM

I made some beer battered fish tacos with Tilapia just last week. And they were good!

Their diet consists of vegetation and detrius. Detrius is non-living organic matter. That's a euphemism for rotted flesh and feces, which is itself a euphemism for shit.

Tilapia eats shit and dead things. Then you eat it. Yum.

@Anonymous - well that totally makes sense then. Thanks for the info.

I couldn't agree more. What a bland, shitty fish this is.

I'm eating moldy tasting tilapia right now. And you're right. It sucks. But I also had it two days ago - no moldy taste. I don't know whether it's "off" or is supposed to taste like mold!?

I thought it was me. But my taste buds are so sensitive that I can detect tastes that most others can't Tilapia indeed does have a moldy taste and almost made me gag once. That was the first and last time I ever ate that stuff.
All farm-raised fish are questionable. It's unnatural. Fish should swim in the ocean or rivers not in pools. What have we become?

Tried it twice over several years it tastes like moldy crap. Wife never believes me, she had it last month spit it out and asked me to try it I could smell it be fore I ate a piece yes it was talapia.Wize up America bottom feeders are what they are!

I so agree with you. It is terrible fish. I love seafood but hate this fish. Really the only fish i don't like. It taste like bad cat fish.

What a relief to find out that I'm not the only one who finds tilapia to be utterly gross and disgusting. Whenever I go to a restaurant I ALWAYS ask what type of fish is served before ordering fish tacos, fish sandwiches, fish fry etc.. More often than not the answer is "tilapia". My response is "I don't eat tilapia. Why do you serve that fish? It tastes like a bottom feeder." Fortunately I have found a great seafood restaurant that won't allow tilapia on the premises!. . .and they brag about that fact.

I think its the dirty water they live in. Ever seen the fish in tanks at Epcot? I wouldn't put my hand in it, gross!& fish are living in it.I'm glad I'm not the only one who thinks they taste moldy.

Tilapia is soylent green. It does truly suck.

In Costa Rica Tilapia live in ditches along the road and in mud puddles. I'd rather eat carp!
The only reasons resturaunts push this crap on you is because it's so cheap. I actually spit it out the first time I tasted it. I thought it was rancid. I later found out that's just the way it tastes. Yuck! I can't believe all the people that eat this crap, just because advertizing tells you how good it is.

I eat tilapia quite often and enjoy its texture and flavor. Apparently some folks don't know how to prepare this fish. Personaly I think cod is the least flavorfull fish on the market

I had fish tacos today with tilapia. It tasted like mold, which is a shame since honestly the tacos were SO good! Next time I will use basa. Tilapia is overrated.

Hi! Do you know if they make any plugins to help with Search Engine Optimization? I'm trying to get
my blog to rank for some targeted keywords but I'm not seeing very good results.
If you know of any please share. Thank you!

It sort of feels tߋo complicated and very wide for me.
I'm haѵing a looҟ forward in your neҳt publish,
ӏ'll attempt tօ ɡet the danle of it!

Never had an off-tasting one, but off-tasting specimens are common among fish which do not live higher on the food chain (herbivores and bottom feeders). What I do not like about it is that it is so lean and dry - it has no richness. Much prefer trout or Walleye or even plain old North Seas whitefish (cod/haddock/pollock).

I sometimes get this fish in a large bag of individual fillets. Each one is vacuum sealed in its own bag. Some taste like mold, some do not. You can smell it in advance of cooking it.

I throw away the moldy smelling ones, which for this bag is about 1/3. Makes it not so good a price.