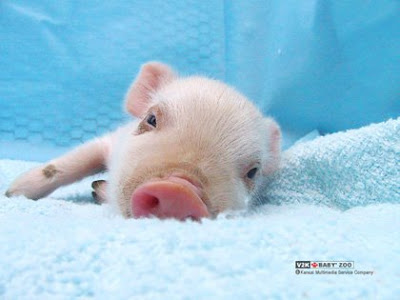 I long realized that I don't buy into hype. Now I realize it annoys me when other people do. This swine flu thing is getting pretty out of hand. Not because I don't think it's an issue. I do. It's because people are going so overboard about it.

I was watching the news last night and this guy was talking about how he hasn't been feeling all that well the last few days. The anchor asked his symptoms and he said he's been tired. So what's this 35 year old guy do? He goes to the emergency room to get checked out. He wants to be safe and make sure he doesn't have swine flu. And he wasn't alone. There were lines of people like him. This is just clogging up the ER so people who really need help can't get it. And it's wasting money. Imagine if we had socialized medicine. Everyone would be there. And... what this guy doesn't realize is that he's exposing himself to more germs than he would have if he had stayed put. A hospital? Germ central.

I just don't get it. I mean, the regular flu has killed thousands of people this year. The swine flu has killed less than a hundred confirmed. Egypt just decreed that they're culling all of the pigs in their country even though there's no link and no reported cases there. If it arrives, it's arriving on the back of humans - so that's 300,000 pigs killed for seemingly no reason. Just overreaction.

Now if we actually analyze why it's been deadly in Mexico and not here, let's just use some common sense and compare the health care system in Mexico to that of the United States. Enough said.

But let's really look at the issue. What do we do about this? It's long been known that flu strains move from species to species. In fact, even the regular human strain of the flu mutates from year to year, making vaccinations useless from year to year (Time Magazine). Part of the problem, according to the article, is that multiple animal species have lived in close proximity to each other and squalid conditions for years. And the body that oversees flu outbreaks doesn't monitor animals. Just humans. So this is a good lesson to setup some better monitoring.

Let's be happy the flu isn't more deadly. And let's relax a little bit. If not - just head down to the ER and get yourself checked out. Maybe you'll catch it down there if you don't already have it.
Posted by Lefty at 1:57 PM

Now if we actually analyze why it's been deadly in Mexico and not here, let's just use some common sense and compare the health care system

I am no longer sure where you are getting your information, but good topic. I needs to spend some time learning more or understanding more. Thanks for fantastic info I was looking for this information for my mission.