Brilliant. The Strategy to Open Up 3 Fighting Fronts with the US 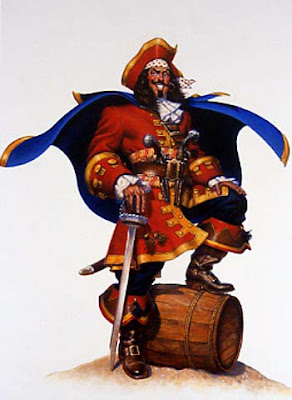 This has the smell of Al Queda. It just does. These pirate attacks appear to be the opening of a third front in our "war on terrorism". If that's even what it's still called? It's actually a brilliant strategy. The US is already stretched thin with our wars in Iraq and Afghanistan and we appear to be the only country willing to do something serious about the pirate "scourge". Fighting a sea war against terrorists is going to be a never ending proposition. They don't play by our rules. And global opinion is making us stick to our dated rules of engagement. It reminds me a little of the image I have from the American Revolution, when the Colonists were sitting in the bushes taking pop shots at the British. This is the same thing our ancestors will be laughing about with us. And of course, I wonder where we're going to get the resources for this? I guess we should just start up the printing presses again. Hell, let's crank out a world war to get the auto industry back in shape - making skiffs for us.

All I know is that if I see 3 speedboats racing towards me, men armed with guns, then I'm not just standing there. That's the line that should have been taken from the get go with these people. Instead, countries have been paying these "pirates" millions in ransom which has just emboldened them more.

How do you fight pirate skiffs with aircraft carriers anyway? It's the same problem we're facing with the insurgent's shoot and run, city fighting techniques. We're just not prepared for this. Maybe Cheney should have been thinking about this during his 8 years as VP. But of course, he's also a shoot and run kind of guy.

My solution? Just like we have with Air Marshals, we should have Freight Marshals. Send 10 SEALS or Navy troops out with every US flagged ship that goes through the Gulf of Aden. Have them specially trained with weapons to fight the terrorists. And have them use their weapons. And other countries can choose to do this or not. There were some 12,000 ships that passed through the Gulf last year. That's 120,000 troops worldwide if you used different troops for every trip. Which you won't. But that's not that bad (and that's 12,000 ships for all countries, not the US).

By the way, I'm a little pissed about these people being called pirates. Pirates hold a special place in my heart. I always wanted to be a pirate, hunting for treasure, sailing a huge wooden ship with a plank. Sporting a wooden tooth and a peg leg (well, maybe not that). Hanging out with Blackbeard and Captain Hook. Or at least Captain Morgan. Please don't call these people pirates! Arrrrrrrggggh!
Posted by Lefty at 3:15 PM