My Take on the State of the Economy 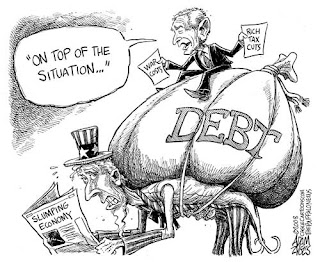 UPDATE: I wrote the following last night...before the markets opened...

Let me start by saying I'm absolutely unqualified to be making comments on the economy. I've had very little training besides an undergrad economics course and two grad economics courses (micro and macro economics). But I read a lot and try to research things that interest me... so I'm going to opine anyway.

I'd also like to say that I'm making these statements with no political motive whatsoever. In fact, I don't even know if it's clear which side each party is on. As I see it, it was a bi-partisan bailout vote with both Republicans and Democrats voting for and against it.

Here's why I think the bailout is...or at least in the state in which it was passed, a bad idea.

Most importantly, it's a band-aid solution. We need to attack the underlying problems. So what are those?

1) There's an oversupply of housing. What happens when there's an oversupply of something? To oversimplify it, there will be a sale. Some way to try to get rid of the extra inventory. Which is what should happen. But I guess we're not going to let it happen. You can't keep propping up supply problems by providing cheap money for people.

2) Sub prime mortgages. The worst of these were mortgages were ones in which the monthly payments simply covered the interest and not the principal - but the real problem was selling these mortgages to high risk individuals, with the government's help. How could institutions sell mortgages in good faith, with complicity by the government, to people who couldn't afford them? And what do we do with them now? I don't think that's been answered. But I think I know why this happened. Because people were making money so they didn't care.

3) How do we pay the 700 billion anyway? Simple, we sell China some more debt. China currently holds $1 trillion of our debt (our debt is currently $9 trillion). What's another trillion? Our debt to GDP ratio continues trending upwards. China also holds $1.5 trillion of US currency. None of these things is a good sign. And I don't think its necessarily good that China holds 1/9th of our debt and soon maybe more.

4) So we just paid the 700 billion. And China paid for it. But where did the money really come from? Well, we just printed it. We're not on the gold standard anymore, so we just make more, without anything backing it. What's that mean for Americans? It's inflation which is really just a tax that the public pays for. Our money is worth less - because there's much more of it in circulation.

5) Now that we've decided to spent the $700 billion, what are we going to spend it on? Who knows. Pump it into the economy to back up the mortgages? So lots of people think that's great. There will be less mortgage defaults. Which I guess means the terms of these sub prime mortgages will change - because how else could we prevent loans from defaulting? I hear so many people talk about how this is going to save the little guy. So if it does actually save people from defaulting on their mortgages, then what happens to the poor people who have already lost their houses? They're just shit out of luck? I have a hard time believing this is going to save the little guy anyway.

6) Who's running this anyway? Oh, Paulson? Just an ex-CEO of an investment bank. He certainly doesn't have any conflict of interest in this.

7) Now that we passed the bill, printed the money, and spent it, what are other countries going to think and what's that mean? Well, lots of people might not care what other countries think - but you should care because it will affect you more than you know. You see, America has been a superpower, and the only one, for years. We've been able to influence world markets (we have the largest sphere of influence in the world), both politically and economically. Around the world people buy up dollars, sell, trade, operate in dollars. Dollars are used everywhere for everything. This might all change. And along with this change, our influence changes. And so does our standing in the world. There are already plenty of countries lining up against the US (Russia, Iran, North Korea, Venezuela, Bolivia... and it keeps growing). An economic mess and a devaluation of the dollar will only serve to grow that list and make their voices louder.

Just a few months ago - China mentioned the possibility of dropping the dollar. And that almost sent world markets into a dollar selling frenzy. Which further caused the dollar to drop. If the dollar gets dropped - our economy will be reeling even further. We need to reinforce the value of our dollar - and that doesn't happen by handing out $700 billion. It happens by solving the problems that got us into this mess.

8) What are we going to do to ensure this doesn't happen again? We should start with some oversight. Some rules. And some regulations. But I don't really see a good plan for this now. Hedge funds, derivatives, and all of these other creative financial instruments have been left to Wall Street without oversight. And it's created this huge bubble. I think that should be our first priority.

We're spending billions on wars. We have a housing mess. A Wall Street mess. A loss of consumer confidence. A loss of confidence from our allies. And our growing list of enemies. In addition, the US has a negative savings rate. That's right, our people spend more than they earn. And this didn't just happen now, these are 2005 statistics. Do you know when the last time that happened was? During the Great Depression. China on the other hand has a 35% savings rate.
Posted by Lefty at 1:47 AM