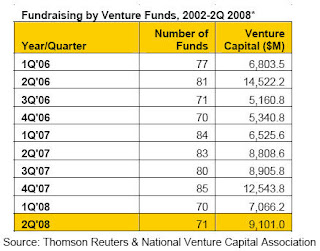 There's been a lot of talk about what this economy means for entrepreneurs here in the Valley and throughout the world. Let me start by saying that it doesn't bother me at all. In fact, I embrace it!

For all of you young entrepreneurs who weren't with us during the dotcom bust of the early millenium, you may be a bit apprehensive about what we're in for. But I say, fear not. For two main reasons. The first is short term while the second is a bit longer term.

In the short term... meaning throughout the end of this year, there's lots of money still being spent in the valley. Last year was another banner year for VC funds. In fact, the first two quarters of '08 already have outpaced '07 (see image above) from a money raising perspective. While that trend certainly won't continue through this quarter and next (and beyond), that money still needs to be spent. After all, it's not going to do those VC's any good to sit on all of it.

In the long term - there are quite a few more reasons why this is good for us. Ever since following the companies who pulled through the last downturn and also educating myself with some great articles I saw over the last half year (Inc. magazine for one, here), I've realized that one of the most promising times to start a new venture can be during a downturn. Why?

1) First of all, you can kiss some competition goodbye. In a tight market you'll see less people willing to take a risk, leave their comfortable job, and jump into the uncertainties of starting a company. And you'll see more people who were half assing a startup or doing it as a part time endeavor, just give up. So, very happily, I'm hoping we see less of those "twitter for basketball" companies throw a website up and get funding. It's natural selection. And I like it.

2) With less competition, hiring good people will be that much easier. Less opportunities for those brilliant people out there. And you should always be looking for brilliant people. People better than you. What HR department wouldn't embrace a time like this? That is, as long as they're not downsizing. And if you're a well run startup. Or an early stage one, you shouldn't have enough employees to even think about downsizing.

3) The companies who have already raised and spent their money will find it harder to raise and spend more if they're not proving their worth. So if you're one of those companies - well, it's time to get your act together.

4) Getting funded on an idea and some users won't cut it anymore. If web 1.0 was about eyeballs, web 2.0 is certainly about users. Up until recently (and probably still), if you had users, you were getting money. I think we're going to see that angle dry up. Now it's going to be about a business model. About sustainability. And about making money or the potential to make money.

5) You learn to be frugal. This is a great learning experience because you value the money that people give you to build a successful business. No wasted money on employees you don't need, PR you don't need, office space you don't need, and t-shirts you don't need. You make things work and pour more time and energy into becoming successful. You're more calculated and focused. You do things for a reason. It's the way a business should be built - the good old fashioned way.

6) I've always thought that regardless of the economy, if you have a good business, you'll get your money. If you're providing a tangible value to people and you have a way to generate revenue from that, you'll be able to leverage that into funding.

So maybe you work a little harder, eat a little less, and sleep fewer hours. But if you're passionate about your idea, don't let a hiccup (or a total choke) in the economy get you down. There are plenty of history lessons about companies flying high through a recession. And there's no reason you can't be one of them.
Posted by Lefty at 12:20 AM

Hi, I am Jeremiah I have a blog, too.
It is
jeremiahsblog-jeremiah.blogspot.com

I am only ten years old.
Go check out my blog,too