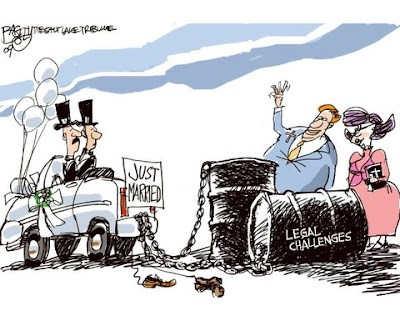 I'm driving home today from San Francisco. I have time to think. And I begin to ruminate about 3 things I saw on CNN.com this morning that really got me going. The first is this gay marriage ban that was upheld by the California State Supreme Court yesterday. The second, the monkey they've found which proves evolution. And the third, the Taliban seeking to return to their peace deal in Pakistan. I'm sorry about my points of view in this post. While they are mine, I usually try not to engage in political or religious discussions. They rarely go well. But I couldn't resist today.

Let's start with the gay marriage ban (here). I just don't get it? Not in California anyway. I mean, I don't care how you feel about homosexuality in terms of whether you agree with or not - that's NOT the point. But to put a law on the books to ban it, to remove people's civil liberties is beyond me. It reminds me of the Civil Right's struggles of the 50's and 60's. Not that I was around, but how is this any different? And 50 years later I think most educated people will agree that granting civil rights to all people was the right decision. Apparently for anyone except gay people. Look at it this way, I don't agree with Anna Nicole Smith and that oil tycoon's marriage, but I'm not about to propose a law opposing it. It's a decision that's not hurting anyone else and something two people choose to do - so stop wasting time debating it. It shouldn't be up to you. Unfortunately, some of you will argue that the state voted for it with Prop 8. And I ask this: Do you really trust that just because a majority of people voted for it, that it's the right thing to do? If there was an all white town in the deep south, run by the KKK, and they voted for killing all Jews (or at least denying them their rights), is that ok? And if you look back before the Civil Right's Movement, I'm sure a majority of people would have voted against it, were it up to a vote. That's why there's a Supreme Court, an Executive Branch, and The House/Congress. It's checks and balances.

Then there was this story about finding the 47 million year old fossil remains of a monkey that happens to be the missing link between humans and monkeys. It basically proves Darwin's theory of evolution. And boy am I surprised that evolution may actually be proven after all these years (note the sarcasm). What really catches me about this story though is the implication it's going to have on creationist religions. How are people going to twist their religious stories so that it becomes compatible with evolution? And what are those people who have proposed teaching creationism in school going to say? I can't wait for the day when those people will be silenced. To me, that's brainwashing. And this all links back to that first story about gay marriage. If everyone who is opposed to gay marriage is opposed because of their religious beliefs (ie: the Bible or whatever text it may be), then hopefully this monkey link is going to damage a lot of people's belief in that written word. Unfortunately, instead of embracing science, there will be a debate about the validity of this scientific proof. And we'll go on believing a book that was written by unknown people 3 thousand years ago and more.

The last story I read, which doesn't really have anything to do with the previous two, is the peace deal that the Taliban is seeking in Pakistan (here). Basically, they had a peace deal in place that enforced Sharia law in the Swat Valley in return for peace from the Taliban. The deal broke down when the Taliban decided the Sharia law wasn't strict enough, even though it had already forced women inside and closed schools to girls (among other things). So the Taliban moved into Bruner district and took up arms, some 60 miles from Islamabad. And Pakistan said hell no. And has been pushing them out. Now that the Taliban is losing, they want that peace deal back. I say, screw you Taliban. Nice try. And I really hope Pakistan doesn't give in. Because, just like in Afghanistan, the Taliban will regroup and then come back when they're ready. How do you trust a group like this to uphold a peace agreement they already broke?
Posted by Lefty at 12:34 PM