Why We Embrace Mediocrity? - Thanks Om Malik (from GigaOm) 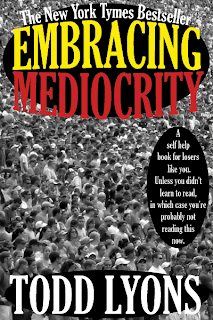 This morning I read a brilliant post that certainly touched a nerve. It's a nerve that was overactive in 2008. I hope 2009 is better, or else I may begin to suffer some serious Neurapraxia.

Why were companies complacent with their performance and with their products and services? Why is mediocrity just ok? And did this maybe, just maybe, contribute to our global economic crisis? Ok, I actually won't say maybe. I'll say definitely.

I've talked plenty about deteriorating customer support, crappy products, and even crappier management. And at times I wondered if I was too much of a cynic. Now that the world is collapsing, people are beginning to look back at this. Why are people so damn greedy and stupid? Madoff is just the tip of an iceberg filled with moral depravity and stupid decision making. Did he really think he was going to get away with this? Sure, there are loads of companies who can function and operate like this, in good times. But in bad times, these companies will face certain death. That is, unless management continues to take advantage of people or our government continues to print money. The steel and newspaper industries are now looking for handouts (here). When is that going to stop? Who's next?

Just a little excerpt from the GigaOm post (here):

"Whether or not the bailouts were needed remains up for debate. I will let others scream and holler in outrage about the immorality of the actions taken by our completely biased politicians. I will let those who are suffering tell their tragic stories on national media. All I am going to say is this: In 2008, U.S. society — from the very top (our political leaders) to the very bottom (our bankers) — came to embrace mediocrity.

In offering money to bailout failed bankers who couldn’t bank, car makers who couldn’t make good cars and chipmakers who have seemingly no business acumen, we stood on the top of the roofs and said: Mediocrity is OK. In the meantime, not one person has been held accountable for bringing fiscal, moral and social Armageddon to our doorstep."