This Blew Me Away - My Grandfather Uses a Wii 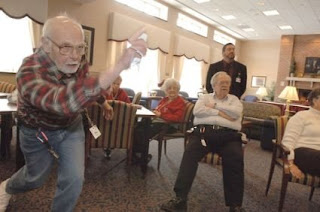 Disclaimer: That's not my grandpa above. He's much better looking.

I was talking to my aunt today. She had just returned from a visit with my grandfather. The same man who gave me a lifetime of stories when I went to see him last month. Well, I didn't think anything could top his stories of single-handedly winning WWII, but I think this did just that.

I had to call him tonight to confirm this. He's been practicing with the system at the center, but he's not content with his game. So he went out a few days ago to get his very own Wii. I don't even have one! Well, they were sold out. And the clerk told him that they'd be getting more in when "the Japanese decide to make more". He chuckled, agreeing that customer service these days is missing a step.

He can't wait to get the tennis game too, so he can beat the crap out of his friend who lives down the hall. His friend had back surgery and can barely walk. But he's fired up for a game. He's also been burning CD's and swapping collections with his friends. I'm sure the RIAA would probably sue his ass if they knew. But my god! To top that off, he's been practicing his drumming. Said he always wanted to learn how and decided it's never too late. He already knew about Rock Band... but said that Benny Goodman was more his pace. "Drummer's these days hold their drumsticks like an axe". So he's going to stick to the tambourine he bought as a drum pad instead of his Wii.