The Downturn Has Hit The Valley! 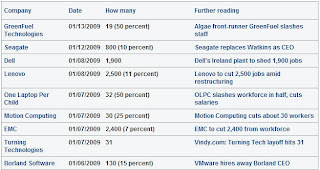 Just last week I wrote a post discussing my opposition to the fact that the Valley is dead. That was in terms of intellectual capital.

Today, I'm writing to let you know that the financial downturn has officially hit the Valley. This has no bearing on the last post - because it's really two different things. But this is something I've been seeing for the past several months. It always hits us last. Well, that is, unless we're the cause of it (.com bubble).

I was in Florida in November. And I noticed how quiet the restaurant and nightlife scene was. It's usually bustling. That was the first sign that the economy was really taking a hit at all levels. A few months later I'm starting to see the same thing around the Bay. Restaurants that are usually crowded and bustling have empty tables. Food prices at Safeway, a place that loves to overcharge, are down. Roads are less crowded. Yup, the traffic ain't as bad. That's the one relief.

Now the layoffs are in full effect (many more here).