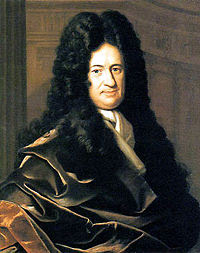 I met with our algorithm guy today (Mark) and had a tremendously educational discussion. We talked calculus, Euclidean distances, neural networks, history, and a lot of other things that would normally make your head spin. Wait, did you just say history? Yup. And lots of it. While it sounds like a pretty strange discussion surrounding Vyoo's approach to the problem we're solving, it will all make sense as I explain.

What really struck me is that most of the ideas we're using for Vyoo really originated from Gottfried Leibniz, a German polymath who was born in 1646. Yea, you heard me! A guy born in 1646 developed the ideas we're using for Vyoo today. Gottfried has a track record of impressive developments. Matrix, boolean algebra, symbolic logic, infinitesimal calculus (independent of Newton), binary numbers, and the basis for Einstein's theory of relativity. Pretty impressive stuff from a guy you probably haven't heard about before.

As our discussion evolved, we began to talk about an author we're both fascinated with, Neal Stephenson. He's written some of my favorite books, such as Snow Crash, and Cryptonomicon. Now, I'm not recommending these to you, unless you're a fan of a science fiction wrapped in science non-fiction. Vague. Yes. But his books are hard to explain. I tend not to like science fiction, but when there's factual data thrown in, I'm much more forgiving. Snow Crash is a futuristic novel about a time when the internet and real life converge. And Stephenson doesn't take you for a fool (when he speaks about technology - it's real. Not like Tom Clancy throwing the word Gigabits and Etherwebs around just for the hell of it). Cryptonomicon is entrenched in math- but fun math. Codebreaking. It's the story about one of the men who broke the code during WWII (Enigma).

What I found strange and didn't really know before, was that Stephenson's recently released trilogy, called the Baroque Cycle, was all about the thread of history that follows natural philosophers, like Leibniz and Newton. Which strangely tied together these disparate interests I've had over the last 20 years of my life. And it turns out these these natural philosophers are a very understudied and unheralded group of people who have had a tremendous impact on the world. Anyway, sorry to bore must of you... but if you weren't falling asleep, you should definitely read these novels!