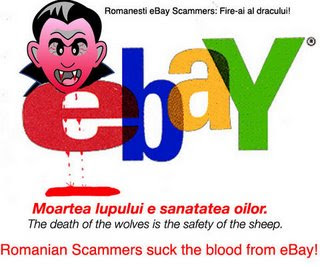 I awoke on Friday and decided I wanted to check out my ebay account. It had been 8 months since the last time I had tried, unsuccesfully, to log in. Well, to no big surprise, I still couldn't login. I sent myself a password reminder. It never came to my email address. I tried to reset my password. No luck. All the info had apparently been changed.

A few hours later and several excruciating and painful online chat sessions with ebay fraud, I finally had my account back. Someone had been selling goods, about $5,000/month in goods, in my good name. I felt violated. For real. Someone had been impersonating me. Even responding to emails with my name. Damn. They had access to my paypal account too. Fortunately, they didn't steal anything. At least not my knowledge.

I would have expected eBay to have been all over this. Starting an investigation or whatnot. Who was I kidding? Why would someone like ebay want to pursue this and make their site safe? Besides the obvious reasons. Ebay actually said they couldn't pursue anything on my behalf. That I had to file a police report and then the police would have to work with them. Ok...so I'll just do that. That shouldn't be too hard.

Well, I called my local PD and they wouldn't even file a report. They basically said there was nothing they could do since there was no monetary loss. And thus, most people would have let the trail die. But not me.

Damn. I had this guy's IP address, which at the very least linked back to a Comcast ISP in New Hampshire (24.63.46.106) - because he tried to reset the password last night and it sent me the IP address where the reset originated from. I had this guy's name or alleged name: Seybou (or Seybuo) Hamidou. I had his PO Box in New york: PO Box 59, New York, NY 10113. I even had his credit card attached to my account. But I couldn't see anything but the last four digits: 2009. That's a lot of info.

I searched through all of the exchanged messages from my account over the last month (since that's all they keep). I found a few tracking numbers from UPS and the USPS. And I knew he had a Discover card.

With all this information, you'd think it would be easy. So I did some more research. I filed a complaint with the FTC and with IC3 (the FBI's identity theft complaint division). I also researched identity theft - and though I suffered no monetary loss, that didn't seem to matter. This is what I found:

Under federal criminal law, identity theft takes place when someone “knowingly
transfers, possesses or uses, without lawful authority, a means of identification
of another person with the intent to commit, or to aid or abet, or in connection
with, any unlawful activity that constitutes a violation of federal law, or that
constitutes a felony under any applicable state or local law.” Under this definition, a name or Social Security number is considered a “means of identification.” So is a credit card number, cellular telephone electronicserial number, or any other piece of information that may be used alone or in conjunction with other information to identify a specific individual.


Now that I was equipped with some knowledge, I went back to the police department and filed a police report, which they finally took. Now I need to wait to hear from the detective and hopefully they'll actually do something. I'm not really holding out hope...so I'm working on tracking this dude down myself. You'd think that they'd make it easy to go after criminals. But it's not. With all the hoops I'm having to jump through and the research I'm having to do on my own, it's no wonder that most e-criminals never get caught. I mean, what the hell?

I'll keep you posted. I've included all the information I have on this guy. Feel free to track him down. If you live in NY. Stake that PO Box out. That would rule.
Posted by Lefty at 3:32 PM

I really admire your persistent to do this research on your own. I don't believe that the police didn't want to take your case simply because there was no monetary loss. The police probably had no idea where to start, what information they need in this type of cyber crime.

You can file a lawsuit against a John Doe (yourself although it will cost you court fees) in civil court. Then subpoena the IP address used to log into your account from Ebay. You can then subpoena the account holders identity (from Verizon, Comcast, Time Warner, ISP) into court record. Then at that point John Doe becomes a real name. Then you sue them for actual damages (damage to your online business and fees incurred), also pain and suffering (punitive damages). I suspect it will be easier to work things out with Ebay out of court.

By the way, the graphic you used for this blog entry may fall into "fair use" under copyright law, however the parody brings rise to a defamation suit from Ebay. To suggest that Romainians suck the blood from Ebay may hurt Ebay's business, as such open you up to lawsuit. Be careful Lefty

One more comment. Since you have his PO Box number, you could subpoena USPS for his identity. You need valid identification to open up a PO Box. If you have time to play in court, this would be a fun internet law exercise. Note, I don't think small claims court allows you to subpoena this evidence building up to trial. You will need to do this in county court.

Yea I was wondering why you were reselling navigation systems rather than the usual jackets and vests!