What Happened to the American Dream? No To Socialization! Of Medicine or Anything Else! 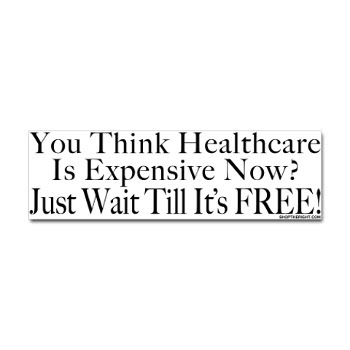 I voted for Obama. I'll be the first to admit it. And while he's doing a great job in some respects, he's doing a downright terrible job in others. What I'm most concerned about are his socializing tendencies. You've already heard me bitch about saving the automobile industry. I think it's an utter joke.

Let me sum it up for you in a few sentences. All of the jobs that proponents of saving the auto industry claim would be lost if GM/Chrysler, etc. were shut down could easily be replaced if we spent that money building new supply chains for electric or hybrid cars. Give Tesla Motors 50 billion and they'll be hiring tens of thousands of workers to keep up with the demand for their products. It's a joke. And anyone notice how GM is "all of the sudden" coming out with socially responsible and environmentally friendly cars when they claimed that they didn't have the technology just a few years ago. What a bunch of BS. I'm getting pissed writing this.

But it's not only autos that really kills me. It's health care and every other industry he's trying to socialize. The US has the most advanced medicine and health care system in the world. Hands down. Yes it's expensive. Because these people train for years to provide American's with the quality of care they deserve. And. They save LIVES! Put a price on that while your auto industry gets government handouts. So instead of really revamping the system to make it more affordable, while keeping the quality of health care high, we're ruining the system. There are lots of examples of ruined systems already, even though Michael Moore would like you to think otherwise. Take a look at Massachusetts for example. Here are some problems:

"No sir, we can't look at you now. I know you have heart problems, but see, we have a line. Take a number". Want that to happen to you?

Healthcare in the United States is 15% of GDP. The highest in the developed world. And that's where the problem lies.

To cut costs, the government continues to cut reimbursements to doctors. Yes, they are reimbursing the care givers less. Not figuring out a way to make healthcare more affordable. So they expect doctors to treat you the same way, but now we're going to pay them less. A lot less. Yea, no worries. Those 4 years in med school, 4 years of internships, years of residency, and your fellowship? That several hundred thousand in debt from school? Don't worry about that. You're 38...you have time to make that back. And while you're at it, we have new regulations that require you to update your office technology, sell your lab equipment back to the hospital so you can't make a profit, accept uninsured which we won't reimburse you for, and you have to work more hours just to make what you used to earn. What other profession pays you less the longer you work? There are no promotions or stock options in medicine.

So here's what needs to be done. Screw the insurance companies. Let's do something about that. Make them compete. Right now they get to cherry pick who they accept. Make them accept everyone. Provide tax relief for those buying their own health care or paying for their health care out of pocket in some way. And how about the pharmaceutical companies. They're printing money. Figure out a way to get prescriptions for less. I mean, shit, we can get them less in Canada, and they're made in the US. Socializing medicine WILL NOT WORK! It's not working in Massacusetts. Or Canada (long lines). Or Sweden (outragoues taxes). Or anywhere else. Not in its current incarnation.

Another reason it won't work is because nobody will want to go into medicine anymore. What was once a prestigious field where the brightest and best students flocked will now be an assembly line job. Please don't ruin our health care system.

And while I have many ideas, here's a proposed solution that highlights most of them. And it's from a Senator, so maybe we'll see it (here).
Posted by Lefty at 11:45 AM