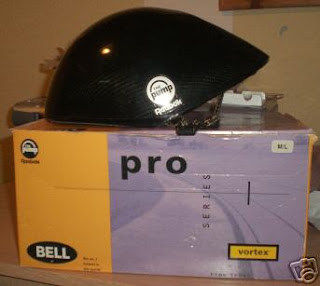 I've had a number of ideas in the past, some good and plenty more bad. One of the more recent of these ideas was a shirt box to keep shirts from wrinkling during travel. Another was a variable intensity braking light so you could tell how hard a driver was slamming on the brakes in front of you (BMW is doing it here, and they have another cool idea as well, here). A third was a pump up bicycle helmet (that, as you can see above, Reebok/Bell eventually made), and there were many more. The only way to really determine the feasibility of an idea is to socialize it. I'm not advocating telling everyone, because certainly people may steal your ideas, but I think talking to people you trust can help determine if your idea is worth pursuing. I'm sure there are ideas out there that people think are crazy, that eventually work out, but it's a whole lot better and easier if you have support.

I first realized that this idea had some merit when my parents gave me the nod. They are usually my biggest critics in terms of idea evaluation, which at first was tough to handle, but in the end I've realized that they've saved me a lot of heartache! They are much more rational with my ideas than I am. And naturally, my judgment is sometimes clouded the by excitement of a new idea.

The takeaway: Talk to people you can trust about your ideas - it'll save you lots of time.
Posted by Lefty at 1:54 PM