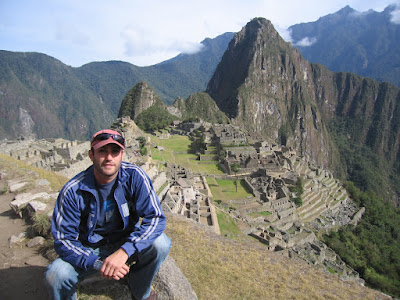 I seem to be taking off large chunks of time from writing this blog. I always said I wouldn't do that, but some days it's hard to write.

Quite a bit has been going on these last few weeks, including a two week trip to Peru. I have to say, Machu Picchu was well worth the effort. It's truly an amazing spectacle.

For full disclosure, I've been struggling with what to do about Vyoo for the past month. I received a credit card statement last month in which I could barely make the interest payment. It was then that it hit me. I'm dead broke (really beyond broke). I have no income. I have no expectation of any real income, and if I raise money, it's months away.

It was depressing to say the least. And while I vowed not to let money dictate the fate of Vyoo, it certainly has played a role in how I'm deciding to progress with the company. We've recently finished the product and rewrote our algorithm... again. I've started pushing more invites out and I'm planning on doing a full launch in the next week. Concurrent with this launch, I've started looking for work to begin to pay the bills.

I'm still incredibly passionate about what I'm doing, but it comes with several caveats. I think it's time to begin progressing my career professionally, meaning moving to a more structure company with financial support. It's time to start paying my bills and my debt down, because I'm not getting any younger. And it's time to generate some cash so I can invest it into the company.

Anyway, I've always vowed to be open and honest about what we're doing, so I didn't want to sugar coat anything. It's been a rough month - one of the reasons I've slacked on posting anything here. But what I've learned more than anything else is that I'm an entrepreneur. And while I may get a "real" job, it's with the intention of getting back to the startup world somewhere down the road.
Posted by Lefty at 1:22 PM

I still love you man! Will be out there is the next few weeks, drinks on me.

I feel your pain. No, seriously.

I hiked the inca trail in late september, so awesome! Peru is an amazing place, hope you loved it, hang in there buddy.

Thanks for the well wishes fellas. Looking forward to catching up with all of you.

Excellent weblog here! Also your website quite a bit up very fast!
What web host are you the usage of? Can I am
getting your associate link to your host? I desire my website loaded up as quickly as yours lol