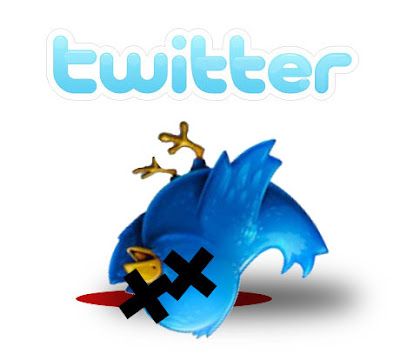 Tweeter. I joined a ways back. It was the cool thing to do in tech nerd circles everywhere. I used it maybe half a dozen times - maybe more. A few people followed me, not sure why. I didn't have anything useful to say. Then it started going mainstream. All the news outlets and celebrities had a Tweeter account. And I was like, what the hell for? Who would follow CNN? What does that even do for you? Just check out their homepage or use an RSS reader. They publish their important stuff anyway. But at the end of every damn marketing message, you now see, "Follow us on Tweeter". Um. Why again? No, I'm serious. Why would I follow your company unless I'm so devoted that I hang on every breath some company breathes. I just checked out United Airlines, my least favorite airline in the entire universe. And here is one of their recent tweets that provides endless value to every consumer:

"Arrive at the airport at least 60 min in advance for domestic flts or 2 hrs for intl or large airports. #UAL12daysoftravel"

Then the Iran reform movement/crackdown gained steam. And Tweeter was supposedly what allowed information to get out. OK. I'll say that it helped with that. It gave an audience to the little people. And it's fairly difficult to clamp down on that. Unless you shut off the Tweeter stream. And I'm still not sure why Ama-whatever-his-name-is-dina-jad didn't just shutoff the internet machine?

I'm revisiting my discontent with Tweeter because of their recent $3.7B valuation. They're going to have to figure out how to monetize the heck outta their site. Please tell me how that's going to work without pissing off their users?

Then I read a sweet little article today, which got me fired up about where Tweeter is headed. And now I feel whole again.

"Because Twitter is, more and more, becoming a gaming platform -- for various games of wit. So up-from-nowhere hashtag trends that inspire a global call-and-response are now, increasingly, crowding out real trends tied to breaking news (celebrity or otherwise)." (here)

I'm rooting for you guys you little up-form-nowhere hashtag writers.
Posted by Lefty at 9:35 AM

have you lost your mind? tweeter is the best. i want to take a smash in your shoes.

I think its only good if you have a cause. Example if you are in a university and you need to keep track of meetings and activities. Thats about it. Well this post certainly reminds me of the time when I worked as a teacher. It was a great job but the pay was not enough for my mortgage.
Now I am working from home selling import export goods online, mostly digital items and gifts for this upcoming Christmas. My profits have been looking great and I was able to pay off my mortgage also. Everyone can do this, work from home and earn big profits online. The question is HOW and WHERE to find info.

Good Share.I hope more people discover your blog because you really know what you're talking about. Can't wait to read more from you!