Comcast redeemed themselves but Rebates Don't 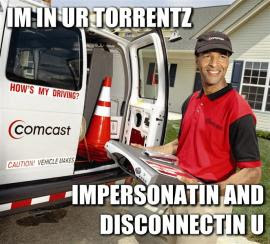 This is a short story, but one I felt obliged to write. I used Tweeter, my derogatory name for a service I still don't fashion, to write an update about Comcast screwing people over by making it nearly impossible to get deals they openly advertise. Well, I was contacted by a Comcast rep who worked tirelessly to get the deal for me. So with that, I was content. But what still chapped me, was the fact that this rep couldn't even find the deal in the system and took several weeks of back and forth phone calls and emails to finally get the deal in place. And for the record, it was a modified deal with shorter terms. But the effort was certainly appreciated.

So what's up companies offering deals and then making it impossible to find? I'll tell you what's up with that. It's an insincere form of customer appreciation. If they were really looking to offer their customers a deal - they'd do it outright. And it wouldn't be a shit show trying to get the deal in place. I guess the closest corollary is the rebate model, where companies know that rebate redemption rates are extremely low. For low ticket items, they can hover in the single digits, while moving upwards to around 50% for higher priced items (here).

It makes me wonder how this electronic rebate processing stuff works. I guess just bumping up rebate redemption rates. So I'm sure their actuaries take care of all of that.
Posted by Lefty at 9:11 AM

My name is Mike and I work for Comcast. I apologize for the troubles that you had. If there is anything else we can do to help you, feel free to send us an email. Please include a link to this page. Have a great day.

Electronic rebate would be great if it actually works. I currently work from home selling import export goods online, and granted i keep hearing people say Comcast sucks, i wouldn't know for sure but i hear/think Verizon is really good (but might be a bit on the costly side).