Obama is Making Me a Republican! Americans Need To Take Responsibility! 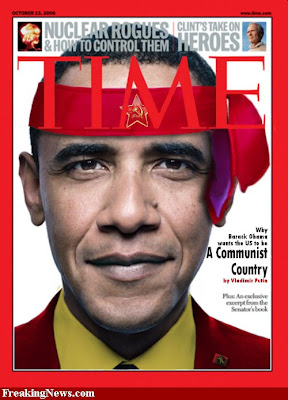 I shunned them. Praising Obama. Loving the thought of having a leader the world respected. Hopeful that we wouldn't be mired in war for the rest of my life. Scorning Bush at every chance and how he single-handedly ended the supremacy of the greatest nation the world had ever seen.

The first six months of Obama's presidency, I was elated. He was taking a different tone and stance on everything. I admired him and loved the direction America was going. Then slowly, cracks appeared in his armor. At once, a person I had thought was a moderate Democrat has become the most left winged socialist I could have imagined. I really hope this is just a figment of my imagination. And that I'm jumping the gun. But he's coming dreadfully close to mirroring some Chavezian policies.

I was raised in a family that rewarded hard work and dedication to school and life. It's part of what drove me to get my MBA and continue to push myself to achieve, even when others viewed my situation as ideal. I've learned not to take things for granted: life, friends, family, finances, and happiness.

I've watched as my parents worked tirelessly to provide for my brother and me. To give us things they never had so that we could live a life they had only dreamed of. And they succeeded.

But change is upon us if Obama has his way. See, we're not being rewarded for hard work and dedication anymore. And we're not at fault for mistakes we make. It's called responsibility. And there doesn't seem to be any culpability anymore. It's disgusting me! My dad is making less money than ever, as a physician. 30 some years of service. And he earns less than he ever did. What other field pays you less the longer you work? Name one. Sure, some of you will scoff... "he's a doctor, he earns plenty". Yea, he spent 10+ years after college in training (that's ten less earning years). He saves people's lives. He's on call. He spends the worst 30 seconds of people's lives with them - having to tell people they are dying. Or telling family members their loved ones have died. If you're complaining about prices. Take it up with your insurance provider. They're making plenty. But enough about that.

America used to be the Land of Opportunity - where your dreams came true if you worked hard. People aren't working hard anymore. They're sitting around and waiting for handouts. This sounds sustainable. Maybe a little adversity would actually make us stronger.

I realize your just ranting here BUT.....

How has Obama's policies affected the amount of money your Dad is currently making? Or the decline he has seen in the past ten years? As of yet he has made no changes to the American health care industry. Hopefully the changes he's currently working on will be positive not only for patients but for doctors as well.

And he's been in office for less than seven months. Over the past month what occurred to cause you to changed your mind from admiration and elation to calling him a Chavezian left winged socialist?

Just my two cents about your two cents.

I agree with Abe.

Nothing in Obama’s policies has yet to make any meaningful impact on your Dad’s salary.

That said, I do agree that the healthcare system in this country is broken and Obama should do everything he can to fix it. Given the level of our overall aggregated wealth in the U.S., there is no excuse why we have Americans losing their livelihood because they are unable to get health insurance and as a result are drowning in healthcare debt. We should be role models for the rest of the world by providing basic human needs such as education and healthcare to all our residents. No response can change my position on that.

I for one am willing to pay a little more in taxes if it means the people I see walking on the sidewalks of my community are taken care of should they fall ill and are given an opportunity for a college education should they want it. The game of life is twofold: one part hard work and one part luck. We should not punish those who work hard and find themselves in difficult circumstances. I consider myself lucky and am willing to give up some of my earnings to make the system work.

A famous Persian poet by the name of Saadi said it best in a poem that is written on the walls of the entrance of UN, “The sons of Adam are limbs of each other, Having been created of one essence. When the calamity of time affects one limb The other limbs cannot remain at rest. If thou hast no sympathy for the troubles of others, Thou art unworthy to be called by the name of a human”

@Abe and SandHillBlogger - Rather than respond to these comments, take a look at my latest post, detailing what is actually transpiring. Sure your ideas for healtchare for all are great. In theory. But since we've already seen it in practice, it's time to re-evaluate the solution: http://www.mylifestartingup.com/2009/07/allow-me-to-explain-healthcare-reform.html