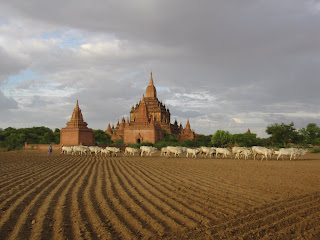 
This isn't a political stance. I'll leave that up to the rest of the blogosphere. I just want to be sure we are all aware of the catastrophe that just took place in Myanmar (here). A cyclone hit that has resulted in an estimated 100,000 deaths that left more than a million displaced and homeless. It's important to be conscious of world events and of the value of human life. It's times like these that allow us to pause and reflect on our own situations and think about how fortunate we are. Myanmar often gets less attention in the world press and I'm feeling that this catastrophe has had far less attention in the media than Katrina or the Tsunami of '04.

I spent a few weeks in Myanmar several years ago. Out of the 40 some countries I've been too, I had one of the most memorable trips of my life there. It's an incredibly rich culture, with caring and generous people, that hasn't yet been overwhelmed by tourism, like some of the other countries in the region (see Cambodia). One of the best parts of my trip was the invitation I received to dinner in Bagan. My host family was a poor farming family that wanted to learn a little more about why someone was coming to visit their little corner of the world. They sent a horse to pick me up and lit the way back to their home with a flashlight. It was a remarkable experience and one that I'll never forget. It instilled in me the idea that no matter how much or how little money someone has, there can be incredible good in people.

Bagan - The Land of a Thousand Pagodas. A countryside \literally awash with temples, all of which are open to explore on your own. And they are empty and lacking the crowds you'd expect to see. It's a serene setting - a place where you literally step back in time and interact with a community that hasn't changed much in years. But they've certainly been affected now and could all use a little helping hand!

AmeriCares
Posted by Lefty at 1:35 PM

Thanks for your post about the disaster in Myanmar. On behalf of AmeriCares, which is one of our clients, we especially want to pass along our gratitude for mentioning us in your blog post.

In addition, here is an interesting article about our work thus far:

Please let me know if you'd like any additional information.