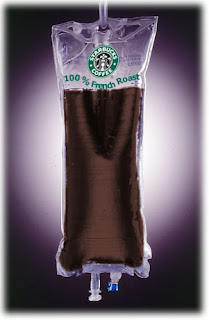 I wrote a post about the ridiculous pricing of Starbucks bottled water last week. And, coincidentally, I saw a few articles the very next day about trouble at Starbucks. The articles were interesting and spoke about how the changing economy is affecting what people now purchase. And $1.80 bottled water is one of those luxuries. So is $1.75 coffee when McDonald's now sells drip coffee for much less. I can't say that it should be that surprising - common sense dictates you can only take people for a ride when the economy is good.

All of this got me to thinking about the economy in general, now that it's in the shitter. How could people not see problems coming? For example, does Starbucks really think that in a cyclical economy, people would continue to pay ridiculous amounts of money for their products (they raised their prices at the end of last year to boot)? And the whole mortgage crisis is beyond me. How could these incredibly bright people not see through the whole crisis? I mean, they've been studying this stuff for years. They understand that the economy goes up and down, housing prices rise until there is too much supply. And lending at sub-prime rates is sure to bite you in the ass if the economy every goes south. When in history has the economy ever not gone south at some point in time? Even in China, where it seems a long way off, the sustained growth will one day slow down.

Well, I got a little insight from a guy I met at the b plan competition last week. He said that nobody really cared about the mortgage crisis...sure they knew it was coming, but they were making so much money (the lenders), that they didn't want to stop. They just didn't want to be the one getting stuck with it, so they'd make their money and hopefully not be around when things crashed. They assumed that the downturn was a lot further off. I guess that's a total dick move. But that's business. In the real world.
Posted by Lefty at 10:03 PM